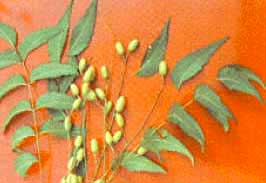 We are one of the dependable Exporters and Suppliers of Neem Products in Maharashtra, India. The Neem Products that we deal in are prepared under the strict supervision of experts so that the quality stays intact for a longer frame of time. They are obtainable from us at the most discounted prices.

Various Neem Products available with us are

Fruit from the Neem tree contains kernels which are rich in oil. Scientific research has confirmed that Neem seed oil and oil extracts are non-toxic to mammals and are very effective organic antiseptic, antifungal, antibacterial, antiviral, dermatological and dental agents. Much of the current research internationally is focused on the use of Neem seed oil as an organic alternative to toxic/synthetic chemical pesticides and insecticides. Knowledge accumulated to date suggests that Neem seed oil will effectively get rid of over 200 pests and diseases from plants and animals. The Neem seed oil does not kill on contact, rather it inhibits feeding and reproduction.

NEEM EC is the general- purpose botanical pesticide of choice for organic agriculture . NEEM EC is widely used in several countries around the world today either singly in Integrated Pest Management or in conjunction with synthetic pesticides. Amongst the other known botanical pesticides such as Rotenone and Pyrethrins, NEEM EC is superior due to reasons cited below. Research has shown that Neem extracts can influence nearly 200 spices of insects. It is significant that some of these pests are resistant to pesticides, or are inherently difficult to control with conventional pesticides (floral thrips, diamond back moth and several leaf miners).NEEM EC belongs to the category of medium to broad spectrum pesticides. NEEM EC works by intervening at several stages of the life of an insect. It does not kill the pests instantaneously but incapacitates it in several other ways.

Mode of Action
The bitter principles from neem kernels act as potent insect anti-feedant and of the sixty or so bitter compounds available in neem seed kernel. Modern Science has isolated & identified Azadirachtin as the Chief ingredient in Neem Seed responsible for the Action on the pests. The extraction of Azadirachtin from neem seed kernels and its formulation with solvents and surfactant ensure high efficacy and shelf life. It has insect growth regulating and insect repelling properties. It acts against as many as 200 species of insects responsible for damage of crops.

Neem acts as a biopesticide at different levels and ways. This is very important since the farmer is used to the knock out effect of chemical pesticides. Neem does not exhibit this type of effect on pests but affects them in several other ways.

Toxicity : In toxicological studies carried out in the USA and Germany, different neem product were neither mutagenous nor cancerogenic, and they did not produce any skin irritations or organic alternations to mice and rates even at high concentrations. In another Canadian study, Neem was found to be harmless to Aquatic invertebrates and other non-target species.